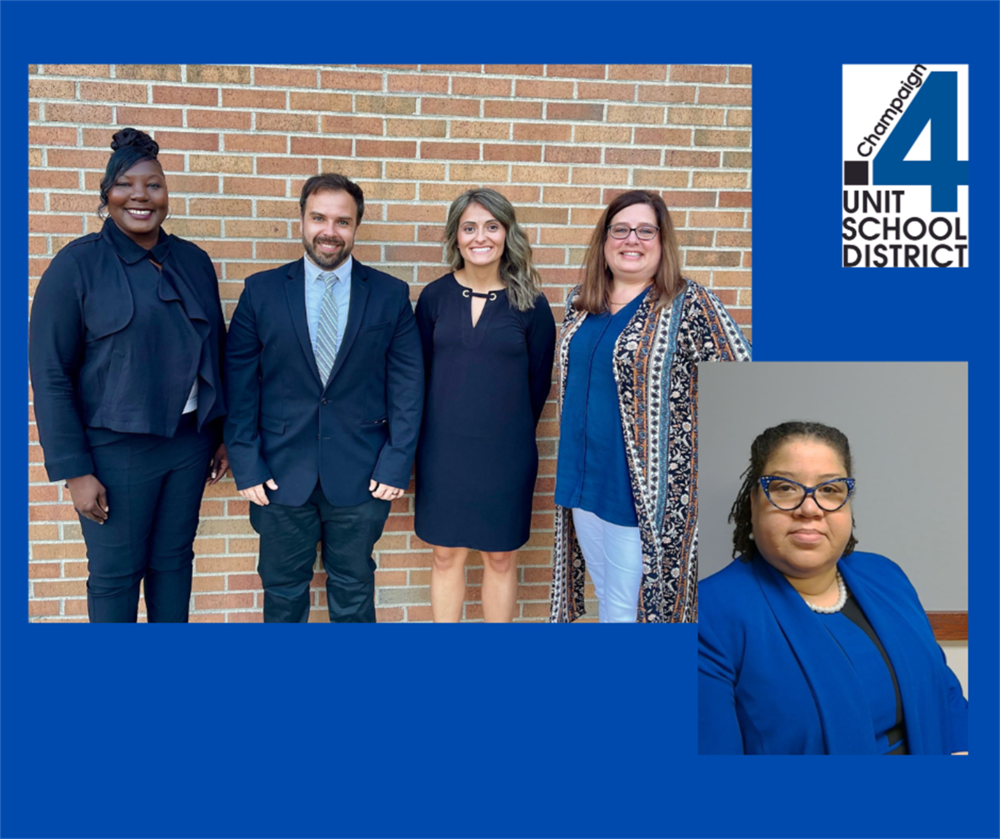 The Unit 4 Board of Education approved five administrative appointments during its August 8th meeting.

Tomisha Carter was appointed Dean of Students at Edison Middle School. Ms. Carter began her career in education in September 2009 when she joined Fort Wayne Community Schools in Fort Wayne, IN. During her seven years with Fort Wayne, she worked as a 5th Grade Teacher, 6th Grade Reading Teacher, and 6-8 Language Arts Interventionist. Relocating to Urbana, IL in August 2016, she joined Urbana School District 116 as an Intermediate Grades Teacher. For the 2018-2019 school year, Tomisha filled a position as a 5th Grade/Special Education Teacher with Rantoul City Schools. Beginning with the 2019-2020 school year, Ms. Carter became an 8th Grade English Language Arts Teacher with Danville Schools #118. She will leave this position to join Unit 4.

Ms. Carter holds a Bachelor of Science in Music with a minor in Marketing from Eastern Michigan University (2002) and a Master of Education in Elementary Education from Cambridge College (2009). She will complete her Education Specialist degree in Education Administration in December 2022 at Southern Illinois University, Edwardsville.

Albulena (Abby) Emroski was appointed Dean of Students at International Prep Academy. Ms. Emroski began her career in education when she joined Decatur Public Schools in August 2017, where she has served for five years. During this time Abby worked as a 5th Grade Teacher at Hope Academy, 3rd Grade Teacher at Dennis Lab Elementary, and most recently a 5th Grade Teacher at Johns Hill Magnet. She will leave this position to join Unit 4.

Ms. Emroski holds a Bachelor of Arts in Elementary Education with a minor in Mathematics from North Central College (2016). She will complete her Master of Science in Educational Administration in May 2023 at Illinois State University.

Garret Hill was appointed Director of Communications. Mr. Hill began his full-time professional career in March 2008 as a Communications Analyst with the Illinois House of Representatives, a position he held for seven years. In January 2015, he left this position to join the Champaign County Chamber of Commerce as a Public Policy Director. After serving four years in this role, Mr. Hill left this position to start his own business, Victory Hill. Garret is currently a Performance Improvement Specialist with Carle Foundation Hospital. He will leave this position to join Unit 4.

Mr. Hill earned his Bachelor of Arts in History, with a minor in Political Science from Western Illinois University (2007) and a Master of Science in Business Administration from University of Illinois, Urbana-Champaign (2020).

Stephanie Kinney was appointed Assistant Principal at International Prep Academy. Ms. Kinney began her teaching career in August 2007, when she joined Rantoul CCSD #137 as an 8th Grade Science Teacher. In 2010, Stephanie began working as a Middle School Teacher with St. Joseph CCSD #169. She will leave this position to join Unit 4 .

Ms. Zollicoffer holds a Bachelor of Science in Elementary Education from Mississippi State University (2002) and a Master of Education in Administration and Supervision from National Louis University (2009).